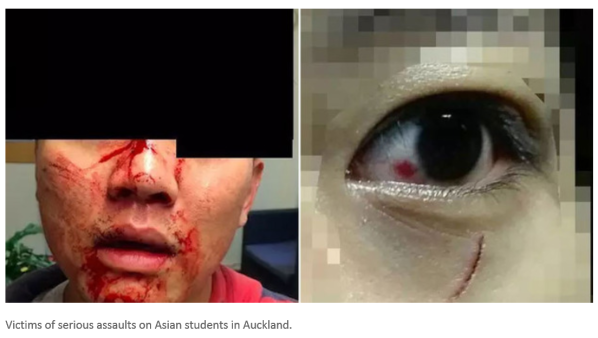 Thinking about studying in New Zealand? Go to another, safer country where gangs of youth don’t prey on people of an Asian appearance. At least six young people have been attacked, beaten and robbed in Auckland recently, almost all of them Chinese or Japanese students. The assaults happened during daylight hours and came as Thai authorities warned citizens about the dangers of these incidents in New Zealand.

The muggings and assaults have been happening all around Auckland:

The first attack occurred last Tuesday evening. Two female Chinese students from the University of Auckland were attacked and robbed by a group of up to six teen boys and girls as they walked through a park. They were punched, kicked and wrestled to the ground before the group stole a handbag and a phone.

On Wednesday, two Japanese women were attacked near a park by a group of teens. The women were dragged, punched, kicked and robbed. Four teens were later arrested in connection with the attack.

On Thursday morning, a male Chinese student from Unitec’s Mt. Albert campus was walking in Oakley Creek when he was attacked by two men who kicked him, stomped on his head, and stole his laptop before fleeing in a car. Police have posted images of the suspects in the attack.

And on Monday night, an international student was walking on the street on Newmarket when he was pushed to the ground by four youths, ages 12 to 14, who were later arrested.

What the hell is going on in Auckland? It seems that Asians can’t walk on the street and mind their own business like a normal-ass person without getting punched, kicked in the face, and their shit stolen.” source

A prominent Auckland councillor said  enough is enough and has decided to blow the whistle, rather than participate in the “we are a safe country” propaganda designed to entice the international student market to study in New Zealand.

Waitemata and Gulf ward councillor Mike Lee has spoken out against the continued pretense that Auckland is a safe city. At a crowded meeting at the University of Auckland, held in response to the recent violent attacks on international students,  he said there was conflicting information over the safety of the city:

“Auckland is not incredibly safe … it’s not safe at all, it needs to be safe and it can be safe, and together we will make it safe.

“But the people who must lead this are the New Zealand Police … the gangs of violent offenders who frequent the city centre … need to be cleaned up once and for all,” he said.

A report by RadionNZ said that Mr Lee wanted a permanent solution to the problem, not just a few token arrests. He’s formally complained to the mayor about the level of violence.

Mr Lee had previously said he was prepared to advocate on the sutdents’ behalf with the police, saying he’d already complained to the mayor

“It’s not just background noise crime, it’s a serious problem. There’s a racial aspect to it because these kids are seen to be reasonably well-off, and they’re small, and these people are bullies so they pick on them,” he said.

Lee said the gangs seemed to be composed mostly of young women with male minders.

The attacks were giving Auckland a bad name internationally, he said.

“This is bad for those kids, it’s unacceptable in a civilised city, but also it’s giving Auckland a bad name all around the world because it’s big on Chinese social media, and that’s seamless, that goes all through the Chinese diaspora.” …

Other Chinese students at the university were scared to walk home at night, Wang said.

“They said they’re really scared to study late at night now, they want to get home early. Their parents are concerned as well.” source

Police say there are over 700 CCTV cameras in the city but there are gaps in coverage. But when did CCTV ever protect anyone? any shop keeper in New Zealand will tell you that. Perhaps the solution is better lighting, better urban design and more police on the beat protecting people?

The gaps in police protection are having to be picked up by the universities, who’ve started employing their own security patrols to protect students walking through council owned, punlic land…

Unitec chief executive Rick Ede said the educator had put permanent security at the Oakley Creek walkway where one student had been attacked, even though it was a council walkway across a council reserve.

“We have that now covered from 8am to 10pm seven days a week because not only do our students use that walkway, members of the community do as well.

As suspected, a lack of police resources means that areas of Auckland are unsafe for everyone, not just international students:

Labour MP and Auckland mayoral candidate Phil Goff told the meeting he was appalled and ashamed by the attacks on foreign students.

“Each of those attacks were quite brutal attacks, this wasn’t just a bag snatch or a theft, this was gratuitous violence – punching and kicking people on the ground, leaving the victims bruised and bleeding.

Mr Goff called for the police to be better resourced and for the public to be given “a certainty of apprehension”.

“The police aren’t getting the resources … so we need to be sure that our police force is in a position to respond when we need them.”

“We all know that several violent assaults and robberies against Asians took place in Auckland … among the victims were three Chinese students. “In my view strengthening communication and working for a solution should be what we endeavour… today’s meeting is a right step,” he said.

Meanwhile, the Auckland University Student’s Association (AUSA) has launched an event to reclaim their park from gangs of thugs. They have started a petition to get Auckland council to improve safety conditions in Albert Park and plan a rally to draw attention to their cause.

Join AUSA as we rally to Reclaim our Park – but be part of the change as well, and take part in the Albert Park Safety Audit!

As a student, particularly one from outside Auckland, one of the first things you learn upon arriving at the University of Auckland is to avoid Albert Park.

HOW WILL THE EVENT BE RUN??

The event will take the form of both a rally, and a safety audit. Attendees will gather at the Albert Park rotunda before 7pm. The crowd will then be asked to get into groups of two or three. Each group will be given a grid map of Albert Park, with a certain section outlined. It will be their responsibility to go to that sector of the park, and fill in a questionnaire asking them to grade safety conditions, eg. Visibility, lighting, security phones, from 1-10. Some groups may be given multiple areas. They will then return for more speeches and rallying, before moving across to the University Quad for a free barbecue put on by AUSA!

Shots Fired At Auckland Police, Rapes and Murders. Is Crime out of Control in NZ?

Parmita Rani, Stabbed to Death at an International College in Queen Street, Auckland

Palmerston North – Still Not a Safe City, Especially for Women

Injured Mum’s Attacker Was On Bail for Similar Offences