This section contains pages relating to Quality of life in New Zealand and the everyday issues and events that NZ residents and visitors to the country have to live with.

Topics covered in these sub-pages will include the quality of  living environments,  armed police activities in suburban areas, how visitors to the country are treated and information about what  ‘NZ lifestyle’ is really about.

None of these pages are static and they are updated as fresh material is found:

The Abuse of International Students 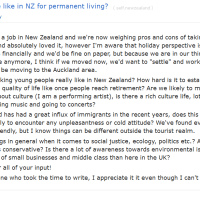