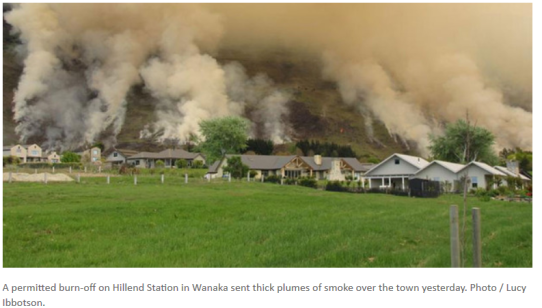 Visit any New Zealand town or city in winter and its easy to see why there is little commitment to reducing carbon emissions.

Many New Zealanders rely on burning wood to keep warm for 3/4 of the year. Despite the fact that much of the country’s electricity comes from renewables the price per Kwhr is high and incomes are low. People simple have to burn wood or suffer the consequences of hypothermia.

Temperatures in the country frequently reach -10°C and most winters snow brings large parts of the country to a halt, but insulation and double glazing are considered expensive luxuries beyond the reach of many. People burn wood because it is cheap. What with the smoke from domestic fires, the exhaust from vehicle emissions (which are poorly regulated) and farm burn-offs (picture above) its easy to see why a brown fug hangs over many populated areas in New Zealand.

For instance, 80% of Christchurch’s winter air pollution comes from wood or coal burners and open fires. Only 10% comes from vehicles and 10% from industry. For up to 50 days each winter, the level of PM10 particles in the air in Christchurch exceeds Ministry for the Environment guidelines. source.

An international scientific group based in Europe has condemned New Zealand for punching below its weight and not doing its fair share to combat climate change.

The group is called Climate Action Tracker and they rate a country’s pledges and policies against its effort to hold the increase in warming to <2°C.

These are the rating criteria. New Zealand falls into the “inadequate” group. Meaning that if all governments were are ineffective as the Kiwis’, global warming would probably exceed 4°C (this would have catestrophic results for the world’s climate). This is not a great look for a country that is selling itself on a 100% Pure image and basing much of its income on eco-tourism related activities such as whale watching.

You can read the full report on New Zealand here on the Climateactiontracker.org website. It is interesting to note that countries traditionally considered to be gross polluters are fairing better than New Zealand in combating climate change. Those countries include India, the USA, China and the whole of the European community.

New Zealand’s projections rise, it is failing to do its part in reducing carbon emissions.

Most of New Zealand’s emissions come from transport, energy, waste, agriculture and industrial GHG emissions, which are likely to increase in coming years because of the way it manipulates its accounting rules:

New Zealand’s preferred accounting rules are likely to generate sufficient credits to permit an increase in GHG emissions excl. LULUCF  (land-use, land-use change and forestry) of 74-94% above 1990 levels by 2020.  As this amount of emission allowances lies far above the emissions resulting from current policies, a substantial further surplus of emission allowances is likely for the post 2020 period. New Zealand would like to use these towards its 2030 INDC target.  Whether all this is possible is, however, subject to some uncertainty about whether New Zealand could legally apply the rules it intends to rely upon.

New Zealand’s climate policy is projected to head in the opposite direction to climate policy frameworks in China, the United States and the European Union.  In China, CO2 emissions are projected to peak around 2025; in the US, emissions are expected to decrease by 14–17% below 1990 levels by 2025; the EU will see a decrease in GHG emissions excl. LULUCF of about 30% below 1990 levels by 2025.  In all of these countries, unlike New Zealand, emissions reductions are expected across multiple sectors of the economy, and are not confined to the LULUCF sector.  There are virtually no policies in place in New Zealand to address the fastest-growing sources of emissions in New Zealand including transport and industrial sources, which comprise over 50% of the growth in emissions in New Zealand since 1990…

This is the part in the report where New Zealand is named and shamed for punching well below its weight:

Per capita emission trends illustrate how far New Zealand’s current policies diverge from widely accepted views of fair burden sharing and equity. Under current policies, New Zealand’s per capita GHG emissions excl. LULUCF  (now at 17.1 tonnes of CO2e per person) are set to remain stable, rather than decrease, and are set to surpass the United States’ per capita emissions excl. LULUCF by around 2025. US per capita emissions are at present 20.6 tCO2e per person and decreasing steadily. This reflects the underlying reality that while the United States is taking action on climate change with a wide range of policies, New Zealand has few policies in place to cut emissions, and has no emissions cap in its domestic Emission Trading System (ETS)…

But the country is more than happy to using its accounting methods to claim credits for its carbon offsets. Does this look like cherry picking to you?:

New Zealand declined to take on a legally binding target for the Kyoto Protocol’s second commitment period (2013-–2020).Nevertheless, New Zealand has announced its intention to continue to use certain Kyoto accounting rules that apply to Parties (to the Protocol) with commitments in order to claim credit for carbon stored in trees, soils and vegetation as offsets against its growing agriculture, transport, energy and industrial GHG emissions… source

Some of our readers may remember that New Zealand has been previously caught out for double accounting on its carbon credits. In December 2009 we wrote about Guardian columnist Fred Pearce accusing the NZ government of keeping two sets of carbon accounts, saying that the NZ climate change minister Nick Smith told him

“those are not the only numbers. “The convention inventory includes a wider set of activities than under the Kyoto protocol.” In a nutshell, the Kyoto protocol allows New Zealand to ignore what is happening across the wider landscape and simply report the growth of its 600,000 hectares of new forests, planted mostly during the 1990s.

That sounds dodgy, though within the Kyoto rules. Even so, if these “Kyoto forests” had been specifically planted as part of a genuine policy to cut the country’s long-term contribution to global warming – we might still applaud.

Unfortunately it is not quite like that. Those forests are not long-term sinks; they are commercial plantations. As Smith’s spokesman told me, they “are likely to be harvested in the 2020s”. And, he added: “The government has no intention to ban the harvest.” When they are harvested their carbon will return to the atmosphere.”

Which means that New Zealand is simply passing on the problem to a future generation to deal with when the forests are felled in 2020, a time in which even deeper cuts in emissions will be required.

That’s based on data contained in a report from the World Health Organisation (WHO), which shows Timaru’s average pollution levels are almost twice those of the country’s biggest city, Auckland.

Timaru recorded the highest PM10 value of 28 micrograms per cubic metre, with Christchurch second at 23, followed by Rotorua on 20. Auckland’s mean concentration was 15…In winter, cold, settled nights mean smoke is not blown away by wind. Those nights also mean the land cools quickly, creating a temperature inversion – a layer of cool air that sits above the city and traps smoke.

“Most People Consider Hypothermia A Symptom Of Being Cold, Rather Than An Expression Of National Identity”

There is a lovely piece of writing by Linley Boniface in the Dom Post. It’s her account about what it’s like to suffer the winter cold in a “flimsy wooden shack” (aka house) in Wellington, New Zealand.

If you’re tempted to emigrate to New Zealand and been seduced by stories about its sub-tropical climate read on. If you already live in New Zealand you’ll know what she’s talking about and will perhaps manage a laugh through your chattering teeth: …read on