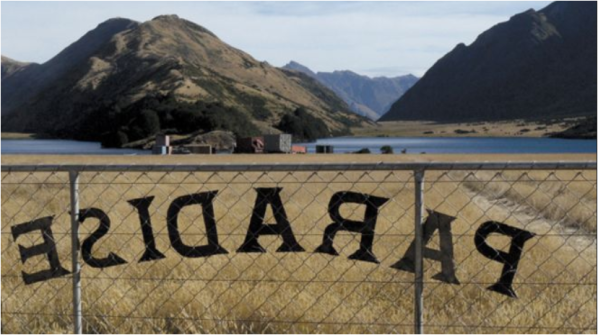 Migrant blows whistle on NZ’s ‘top of the lake’ lifestyle

Welcome to the latest in our series of Migrant Tales – first hand accounts of the migrant experience of New Zealand.

Today’s migrant tale was sent in by an American reader who has lived in New Zealand for four months – more than long enough to have formed the same opinion of the country as many other migrants: New Zealand’s only redeeming feature is the scenery and even that is tainted by pollution. He’d rather risk the gun violence of his own country than New Zealand’s dysfunctional, “hillbilly” society.

I’ve only been here for four months and I’m already having some very serious second thoughts about having accepted a full-ride scholarship to be here from California. The first thing I noticed was how bad the drivers are. Pedestrians, beware! Seriously, what is wrong with these people!?

The other thing is that prices for everything is ridiculous. They even charge for condiments, lol. I have never experienced such a miserly culture in my entire life and I have traveled all over the world. As for etiquette, there is none – these people are down right rude and have no culture or sophistication whatsoever. The people seem green with envy when they find out that you are American and though they feign a desire for diversity, the people I have met are racists, bigots and xenophobes – and I’m white! It’s all for show – feel good sound bytes.

Ever aspect of life here is half-baked. Mediocrity is accepted as quality. A premium price is charged for substandard work and products.

Kiwis are proud of their All Blacks, and quick to judge the U.S. on its gun violence and crime. However, they run around listening to our music, watching our films and television programs, and basically try to be American. To be sure, they are not and will never be like Americans. It’s a totally different culture in New Zealand where quality is a foreign concept, achievement is scorned; particularly, academic achievement, price gouging is the norm, buyer beware (especially automobiles) is the legal framework, and slum lords are allowed to rent out dangerous and unhealthy houses that would be condemned in California.

The only redeeming quality here is the beauty of the environment but they are destroying that too by polluting their rivers. Litter is everywhere in Christchurch and they couldn’t be bothered to get off their lazy backsides and pull the litter from the rivers and creeks. These people are just about the laziest slobs I have ever seen! I cannot wait to be finished here and get back to civilization. I’ll risk the gun violence over this dysfunctional society any day.

Trying to find a job here is darn near impossible. I’ve applied for dozens of jobs and received one rejection letter after another. I really do feel that there is an underlying dislike for Americans here and I believe it is due to envy and the tallest poppy syndrome others have alluded to. Kiwis, for the most part, seem petty, immature, and lack any appreciation for innovation, quality, or progress so it seems. They are happy living in squalor and in using duct tape as a method to repair just about everything. It’s not resourceful, it’s just plain laziness and an acceptance of mediocrity. I don’t think anything will change this hillbilly type culture.

Nice scenery, good wine and food. Shame about the inbred psychopaths
“Smugly standing idle, with our hands out…NZ not part of real civilisation”
Other Migrant Tales

All articles tagged Top of the Lake