The abominable treatment of these rabbits has caused shockwaves around the world and PETA has called on retailers and consumers to stop buying Angora products.

New Zealand has got something of a reputation for its sheep and wool industry so we wondered how humane its treatment of rabbits was. Animal welfare is sometimes not a priority in this country particularly with regard to the indiscriminate use of the inhuman pesticide 1080, vivisection, sow crates, factory farmed cows, male calves being battered to death at birth and dogs used to test the effects of synthetic cannabis, and that’s just skimming the surface.

Below are some videos of rabbit being shearing in front of a live audience in New Zealand.

Advisory – the rabbits are tied down, stretched to ‘smooth out the wrinkles’ and rotated on their backs and twisted before being subjected to shearing with a mechanical sheep clippers. Some may find these videos distressing, yet this practice is regarded as humane in New Zealand.

These rabbits are kept in big barns and runs 20kms away from the glow worm cave in Waitomo. In 2011 they had 350 of this breed kept for commercial fibre production.

“Well, Waitomo Caves could well be the rabbit shearing capital of the world!” source

Quite possibly. One person said this company charges $75, yes $75, to shear a rabbit in this way.

We’d like to know how many of the parents in the Shearing Shed’s audience would be happy if their childrens’ hair was cut like this. Would they take photographs and be encouraged to think it humorous ?

Apparently they shear them in NZ as well , should be banned here as well .
https://e2nz.org/

Wow I am so lucky that this link was posted as I was going to pay $75 per rabbit to have them shorn at that place in Waitomo (I am up in Auckland) thinking they did it with the utter most respect and dignity. Now I just brush my two every day and trim any matts out, so sad to see others suffering.

Perhaps it is time to stop all large scale commerical Angora wool production, can it ever be ethical? Their fur is not ours to wear.

How to clip a rabbit humanely 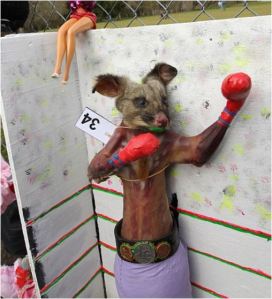 dressed up road kill. Its ok, “they do it to humans too”

…The school has been criticised for  encouraging children to dress up dead animals for the day, which also featured a  wild pig hunt.

It has sparked horror with animal welfare  groups but teachers defended the contest as ‘lots of fun’ which helped raise  more than £4,000 for the school.

Principal Pauline Sutton told the Taranaki Daily  News: ‘There was an amazing crowd and  it was lots of fun. Animals aren’t the only species who are dressed up after  they die. We do it to humans too.’ 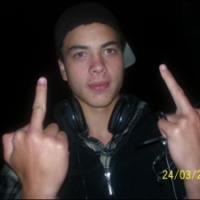