New Zealand’s appalling reputation for violent crime took another knock today with the news that a holidaymaker at a Taupo caravan park was been beaten up for making a noise complaint.

A family vacation came to a violent end as Tegan Coppin watched her husband punched and kicked by a drunken group at a Taupo caravan park.  Tegan Coppin was spending quality time with her husband Aaron, and seven-month-old son, at Motutere Bay Holiday Park on January 6.

Then the revellers woke up the couple’s son by banging on their caravan and urinating on their draw bar Aaron stepped outside to confront the men.  “There were four guys and they were making a point of making noise after we complained about them,” he said.  “One of them smacked me in the head. I tried to get help after the first guy hit me but there was nothing I could do. They were everywhere.”

Tegan could only watch as Aaron fell the ground and rolled into a ball as the group continued to attack him. “There was a point when I thought he might never get back up,” she said. The attackers were eventually driven off by the camp manager who then scarpered before police arrived…

Tegan said it was ridiculous that the problem was allowed to escalate as far as it did and she wanted to see better management of the camp ground. 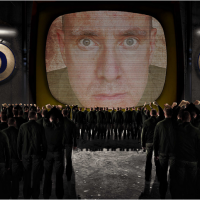