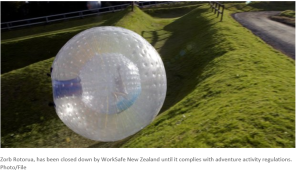 Zorb New Zealand has been shut down by safety officials for not having a safety management system In place.

WorkSafe New Zealand served two health and safety improvment notices on the Rotorua company after investigating an incident in which a woman broke both her legs. Based on information gathered during the accident investigation, inspectors determined the company was in fact an adventure tourism business and  to be registered as one Zorb New Zealand has had to close until it meets those requirements.

Incredibly, Zorb New Zealand appeared to have not required a safety management system before the accident occurred. Which raises questions about what other tourist attractions also lack safety management systems. Waiting for  a serious injury to occur before requiring a system is rather like closing the barn door after the horse has bolted and fallen into a ditch. Surely tourists who believe that NZ has ‘world class’ tourism facilities, are entitled to expect they all come up to the standard used elsewhere in the world.

There are a number of regulatory measures that we must adhere to in operating as an adventure tourism business within New Zealand. Costs are incurred in adhering to these measures, and unfortunately this cost is transferred to the consumer.” source

Ogo Rotorua, which runs a similar operation on the side of Mt Ngongotaha, has been registered as an adventure activity operator since November 2014, and continues to operate.

Mr Key might say… it’s all rather ‘Mickey Mouse’.

Read the story behind it here. 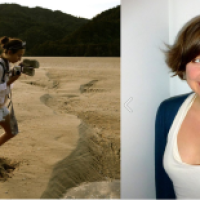 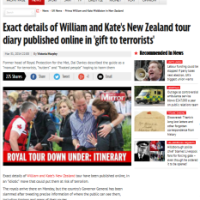