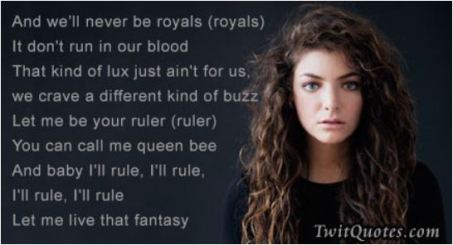 Kiwi musician and recording star Lorde has reacted angrily to the treatment of herself and her family by the NZ media when she returned from the Grammy Awards. Watch the videos here and here

New Zealand has an unenviable reputation for being obsessed with stardom and making celebs pay  a heavy price for their popularity (read the section at the bottom of this page about Anna Farris).

This is what Lorde tweeted about her treatment when she arrived at Auckland airport. 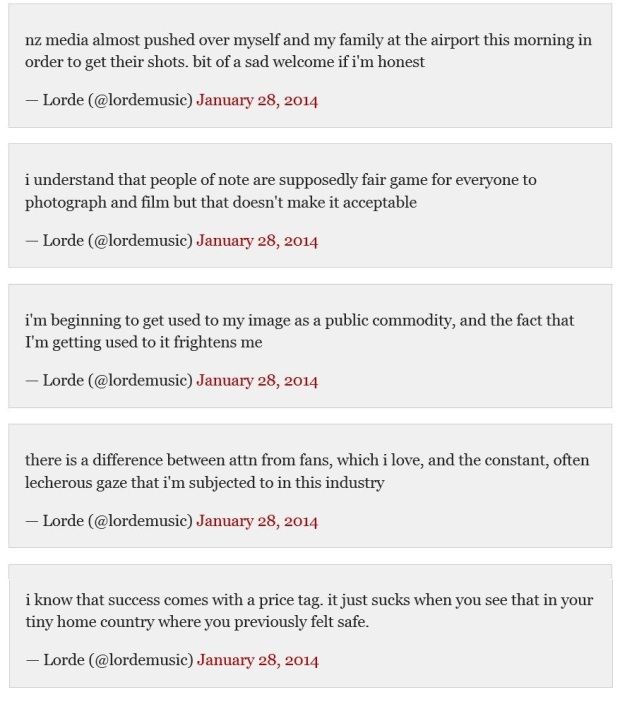 Lorde said she felt unsafe in New Zealand, and disliked the lecherous gaze

She’d previously been subjected to a barrage of racist tweets about her boyfriend James Lowe.

she told MTV News in October of her controversial opinions.

“I have pretty strong morals and opinions being in pop music, and I can’t help but express those, which I think people appreciate,” she continued. “I mean, I don’t think I say anything that isn’t backed up. Most of the time I will stand by things that I’ve said.”… source

Her angry tweets were later deleted, but not before they’d caught the attention of the world’s media and the ‘local’ press back home. Given New Zealand’s propensity for cutting tall poppies down to size we predict two things will now happen.

Update 30/1/14 Dawson: NZ ‘Crushes your spirit’ and “vicious about their own people’

Trans-Tasman media celebrity Charlotte Dawson is also predicting Lorde will be subject to increased criticism, saying that the NZ media would start to call Lorde a “one hit wonder.”

The ex-Kiwi, one of many stars to have left New Zealand, told Mike Hosking of Newstalk ZB she had no intention of living in New Zealand again:

She added “that’s New Zealand. Its a tiny little place that people should be safe in, its their home, you know?”

Dawson also recounted a tale of two high profile friends of hers who were in New Zealand shooting a TV program throughout the country.

When they got to Auckland

Unless you’re very mediocre you need to get out of there, you just have to if you want to keep succeeding because otherwise it will just crush your spirit. And for a 17 year old girl who has done so brilliantly well and the whole country…I know that country…the people of New Zealand are proud, its just the media are going to give her a very, very hard time.

My advice is she’s just going to have to leave New Zealand.

Do you worry for her?

Yes I do, very much. Because in a very small environment, especially when its your home environment and you are very accessible it can be crushing. I was going through a very deep depression when I was living in New Zealand, my mother was dying and people were attacking me left, right and centre. Not the public – the media. They’re vicious over there…”

Strange then, that the NZ media should be so soft in its politicians! Its probably because stars like Lorde and Dawson don’t pay for full page ads during election time. For more read Migrant tales – the NZ media “needs to keep the government and the advertisers happy in that order.

You may also like another NZ ‘lecherous gaze’ celeb story – 100% Pure You? Anna Faris May Think Otherwise (Jan 2011)

Movie actor Anna Faris attracted the wrong sort of attention from middle aged men in cars whilst walking through Auckland a few years ago. They shouted a barrage of highly offensive and sexualised abuse at the popular celebrity.

The Herald reported on an interview she gave in the US, in which she recounted her experiences of visiting  New Zealand

“I’m walking home, I’ve got my backpack on, got my jeans on, and this carload of guys – they were like in their 40s, from what I could glimpse – they said, ‘f*ck you, as*hole’.”

Lopez asked her why they had shouted the obscenities.

She replied: “I don’t know, and, like, three minutes later, a car full of older gentlemen said, ‘show me your tits, you stupid bitch’.

“I was like, you tell me where you are at – I’m going to go home to your place and I’m going to show you a good time with that kind of treatment? Oh, yeah.”

The abuse was then continued by Ian Long – a spokesman for Tourism NZ –  He chose to denigrate her further and with one swift move plunged the status of women in NZ back into the dark ages. Is it normal to’ blame the victim’ like this in NZ? (rhetorical question) and to confuse an acting role with a real life personna?

According to the Herald report

“In the same segment, she accepts an award for being a pothead stoner of the year and she’s quite clearly had a few. I don’t think she has any credibility,” he said.

Long’s attack on Faris was echoed by New Zealanders approached in the street, some of whom appeared to blame Faris for the abuse.

One man said that if she was famous she must expect “attention”; a woman said she “gets her tits out” in movies so shouldn’t be surprised at the public reaction…” more here