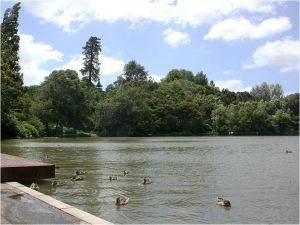 “Two men, one armed with a knife, have robbed two Chinese visitors in broad daylight while they were walking in the popular Hamilton Gardens.

Police say the 60-year-old woman and her husband were followed before being confronted by two men in the gardens about 3pm on Monday.

“One of the offenders was armed with a knife which he used to cut the woman’s shirt and then cut away a money belt worn around her waist,” Detective Sergeant Nigel Keall said…” more here

What the report didn’t pick up on was this was the just latest in a string of armed robberies in Hamilton.  On 4 March a woman was robbed at gunpoint whilst walking along the bank of the Waikato river.

All this is happening against a backdrop of crime in a town in decline, with reports of under age drinking, vandalism and thuggish behaviour. Local louts have also been throwing rocks and screaming abuse at tourists on excursions down the river. Read more about that here.

Waikato River Explorer owner Darren Mills told the Waikato Times that is was only a matter of time before someone was hurt. That someone was almost the Chinese tourist whose clothing was cut away by her attacker.

“Mr Mills was also concerned about the number of children “hanging around Wellington St beach” who are drinking alcohol. “I’m talking about children as young as 7 or 8 sitting down on the jetty drinking – it is unbelievable,” he said…” source

Unbelievable? we don’t think so, this could be remarkably commonplace for many small towns and villages in New Zealand. What else is there for these poverty stuck kids to do and what have they to aspire to when they grow up – other than become professional thieves, prey on tourists and live on benefits.

Isn’t this the sort of behaviour one would expect in third world countries?

Pukekohe Kids Hijack Car At Gunpoint, “Get out of the car bitch” (Elderly woman hijacked by three kids, the youngest was 8)

Kids in New Zealand, the village lets them down  (Parents in Whangarei organising fights between their kids so that they can sort out their differences)

Terrified Chilean Tourist Punched, Robbed In Nelson (“Three teenagers punched and robbed a terrified Chilean tourist in broad daylight at the Church Steps on Saturday evening in another of the alcohol-fuelled attacks that are blighting Nelson.”)

Kaitaia’s Kids’ Drunken Night Of Rampage. Mob Rule (Residents of the small Northland town of Kaitaia suffered $10,000 in damages after a ‘group’ of  10 tanked up kids rampaged through the town for three and a half hours one Monday night)

6 thoughts on “Elderly Chinese Tourists Robbed at Knifepoint in Hamilton”