Auckland’s already congested transport system came to a shuddering halt yesterday and there was dancing on the motorways as Tongans turned out in their thousands to welcome their rugby world cup squad to New Zealand. The team responded to a rapturous reception at Auckland airport by performing a ‘haka’:

It followed a similar display from the Samoans when they arrived earlier:

With so much local community support for the Pacific Island teams there’s every chance that Tonga , buoyed by the support of their fans will shake up the ABs at the opening match of the tournament.

It should  all start with the Tongan challenge that usually  puts the AB’s choreographed, sometime prosaic, Ka Mate in the shade (please, no Kapa o Pango there are children watching) Unfortunately there is talk of the Tongans holding back from performing their sipi tau, a form of the Kailao, because of the face-off it caused with the All Blacks at the 2003 world cup (below)

Not a chance, we don’t see that happening, this is just pre-match psychology: ensuring that the grateful  crowd is sure to erupt with joy if they do perform it.

Pacific Island leaders are already in the country attending their forum, which was very neatly arranged to end just as the tournament begins and we’re waiting to see who will be the ‘mystery NZ sporting legend‘ putting in an a appearance at the RWC opening ceremony (how many internationally recognized celebs does NZ have, even of the sporting variety?)

In common with many latter-day NZ celebs he has been given name suppression, but whisperers say it’s Jonah Lomu – a famous Tongan sporting celeb, who used to play for the All Blacks.

An estimated 7,000 New Zealand-based Tongans mobbed the team, making this tournament seem even more like a Pacific Islands World Cup.

Reminding us all that New Zealand, which often tries to place itself an influential player on the world stage, is still firmly part of the Pacific Island community. 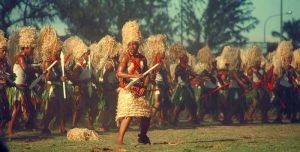 Aye, ay! Aye, ay!
I shall speak to the whole world
The Sea Eagles is famished unfurl.

Let the foreigner and sojourner beware
Today, destroyer of souls, I am everywhere
To the halfback and backs
Gone has my humanness.

Maul and loose forwards shall I mow
And crunch any fierce hearts you know
Ocean I drink, fire I dine
To death or victory my will is fine.

That’s how Tonga dies to her motto
To her motto Tonga gives all.
source Wikipedia