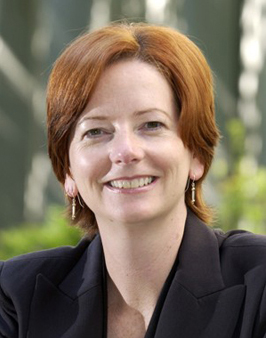 Shipley ousted Jim Bolger in December 2007, gathering support for her nomination whilst he was away at a Commonwealth Heads of Government meeting. Despite good economic growth her government became unstable and she lost the support of NZ First after Winston Peters was sacked from cabinet.

The NZ press was today speculating whether Gillard will be taking Kevin Rudd’s place on an official visit to New Zealand next week, when he was due to speak in Parliament.

Gillard, who was born in Barry, Wales, is the daughter of a coal miner and suffered from broncopneumonia when a child. Her family moved to Australia in 1966 for the warmer climate, settling in Adelaide.

Australia currently has two female state premiers – Anna Bligh, who was born in Queensland and Kristina Keneally, who was born and educated in the USA and only became a naturalised Australian in 2000.

New Zealand has had two female Prime Ministers, both born and bred Kiwis. The last of which was Helen Clark, who won three consecutive terms in office. On loosing the election in 2008 she promptly left the country and became the administrator of the United Nations Development Programme on April 17, 2009.

“Ms Clark, who had no children, also fought the construct that her unconventional lifestyle was not ordinary enough for New Zealanders.

In a 1995 interview she once baulked: “I saw a line in a Christchurch Press editorial that New Zealanders like their leaders to be ordinary like them.”

“For God’s sake, I am not prepared to make myself ordinary.”

It’s great to see a British woman do so well as an immigrant in a far land, we think it will be a long time before a female immigrant is able to do the same in New Zealand.

We wish Ms Gillard the very best for the future.