In today’s budget New Zealand’s National Party Government announced it intends to scrap tax cuts promised at the last election and will suspend $2 billion in annual contributions to the NZ Superannuation Fund for the next 10 years.

The promises were made despite National knowing back in Feb 2008 that the operating balance was shrinking fast – already down by a third, and that the superannuation fund had already suffered significant loses due to falling stock market with worse still to come.

At the time Labour party’s Minister of Finance Dr Michael Cullen said his party would “not offer tax cuts that result in additional Government borrowing, or which cause cuts to services, increase inflationary pressures or inequalities.”

National’s budget today announted that new government spending is to be reduced to $1.45 billion for the coming year and reduced to $1.1 billion per year following that.

The budget deficit is the largest for 25 years and expected to stay in the red for 10 years, peaking at $12.5 billion in 2011 which is approximately 7% of GDP

Before the budget Standard and Poor had said that the country’s AA plus rating was under threat because of rising deficits and increasing debt burden. It envisaged a downgrade to AA minus saying that the government needed a “credible medium term fiscal plan.”

It remains to be seen if this is it. 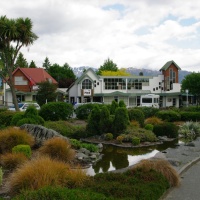