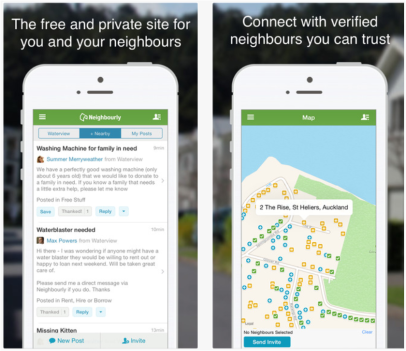 Is there something wrong with the social cohesiveness of New Zealand if people need an app like Neighbourly ?

Last week there was an editorial in the ‘new look’ Kaikoura Star inviting readers to jump on a “wee gem” of an app called Neighbourly, presumably to help spread the gospel of New Zealand: book of Kaikoura, and to reinforce those feel good feelings about having to live there. Evidentially, the scenery is not enough.

One has to ask why a country like New Zealand needs an app for people to get to know their neighbours? What does that say about the country’s social cohesiveness? Do people in NZ prefer to talk to their neighbours on-line rather than across the garden fence?

Have you tried the app, what would you say about your little slice of NZ heaven?

The Neighbourly app is available from neighbourly.co.nz/mobile.

The latest biennial Sovereign Wellbeing Index has been published, and it’s still not good news for New Zealand, with no improvement since the 2013 survey.

It appears the lack of a social life, and an almost negligible sense of community, is affecting people’s wellbeing in the most remote country on earth. This is something to consider if you’re from Europe and are leaving friends and family to emigrate to New Zealand.

“Kiwis are socially disconnected and it is taking a toll on their wellbeing, according to a new study.

The Sovereign Wellbeing Index 2015 results found almost 40 per cent of New Zealanders only met with others socially once a month or less.

Meanwhile, only 4 per cent of the 10,000 New Zealanders surveyed said they felt close to people in their local area.

The 29 European Countries compared to New Zealand are those included in the biennial European Social Survey.

The survey also revealed that 2 out of every 3 young people in New Zealand show signs of a depressed mood, something to bear in mind if you’re taking your kids there because you think it’ll be a better place for them to grow up. Add that to the country’s appallingly high youth suicide record (the rate for females is the highest in the OECD and males aren’t far befind) and you may want to consider somewhere else.

Here’s the rankings for the wellbeing features, compared to 29 European countries, New Zealand ranks in the bottom 10 across all scale items. After reading this you may decide to stay put or look somewhere else…

9 thoughts on “Have You Tried Neighbourly? Isolated and Lonely NZ, Kiwis Fare Badly for Social Connectedness”