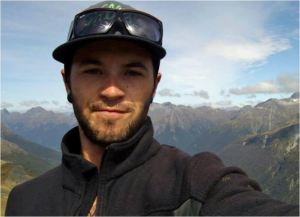 Police say they’ve made some progress in identifying the “mystery object” thought to have been thrown from a passing white ute (pick up truck) which killed 22 year old motorist Rutger Hale.

Mr Hale, a seasoned world traveller had recently completed an American road trip without incident. He was driving with his girlfriend Danielle Oylear near Lake Hawea, Wanaka, in New Zealand when he was struck by the object. It was large enough to leave a first sized hole in the windscreen.

Chances are the object was a beer bottle that fragmented on impact, or a rock. It won’t have been the first time beer bottles thrown by hoons have caused injury in New Zealand. Read Tauranga Grandmother In Coma After Bottle Attack:

“A 65-year-old grandmother has had five metal plates inserted in her face and undergone reconstructive surgery after a beer bottle was thrown at her from a car.

Mary Loader, from Papamoa, in the Bay of Plenty, is now in an induced coma in Tauranga Hospital after the half-full beer bottle was thrown at her from a car full of young men on Domain Rd.

Police are still no further in finding the ute, or the perps.