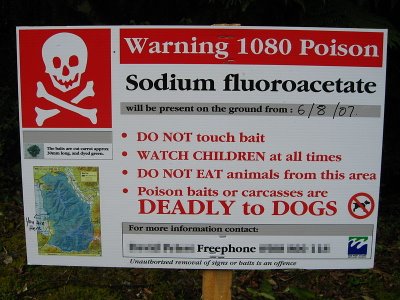 It’s good to see that farmers, so often the guardians of a nations land and wildlife, have started to organise themselves into a pressure group called Farmers Against Ten Eighty (FATE) a group that has serious concerns about the use of 1080 in New Zealand and is calling for alternatives that are “genuinely clean, green 100% Pure.” This is a Karameans Advocating Kahurangi Action release on Voxy:

“KAKA welcomes the establishment of “‘Farmers Against Ten Eighty” (FATE)–a new national anti-1080 organisation–at a time when the Animal Health Board (AHB) is actively engaged in a costly national media campaign to promote and justify the continued use of 1080 and its aerial distribution.

The emergence of FATE is a powerful public reminder to the AHB and its pro-1080 adherents that, contrary to their repeated claims in the media, they do not enjoy the overwhelming support of N.Z. farmers. In fact, many if not most farmers, including a significant and increasing number of dairy farmers, have serious concerns about the use of 1080 in the AHB’s Tb eradication strategy. FATE’s emergence is a timely reminder to advocates of the use of 1080, such as the AHB, TB Free NZ and Federated Farmers, to listen more seriously to the legitimate concerns of their members. Many farmers do not appreciate the broad-scale indiscriminate use of 1080 poison in their name. Many are also justifiably concerned about potential negative impacts 1080 could have on export markets for their products, the environment in which they live and potential human health implications for themselves and their families.

KAKA, FATE and other anti-1080 campaigners seek the speedy implementation of viable alternatives to 1080–alternatives that are genuinely Clean/Green/100%Pure, better serve the needs of rural communities and which ensure a long-term future for our agricultural export industries.

Congratulations to the members of FATE and Mary Molloy, the group’s interim spokesperson.”

“We have growing New Zealand-wide support. And remember very few farmers allow 1080 to be dropped on their land – farmers know it can kill everything,” Mrs Molloy said.

“Let’s refocus back to the original reason the AHB was formed – to help farmers rid their herd of TB – not to rid the whole of New Zealand of every possible vector for bovine TB.”

Mrs Molloy said people needed to know that poison was not acceptable in New Zealand. She believed 1080 was not only ineffective, it was also dangerous to both human and animal health, and had the potential to cause catastrophic trade problems if it was to get into the food chain.

“There is no trade barrier against TB, there are countries with less, like Australia and US, however our markets would be closed if 1080 does get into the food chain,” she said.

“It doesn’t go into the bush and only kill possums and stoats. 1080 is such a far reaching poison. There is nothing it cannot kill.”

In fact she couldn’t believe there hadn’t already been a major disaster involving 1080 – a chemical the United States saw as a potential terrorist tool.

She said the Animal Health Board needed to look at different strategies for dealing TB.

“We believe that farmers can help themselves more and that persistently infected farms should be assisted to become clear – maybe some new techniques or review older techniques like not grazing in high-risk areas,” Mrs Molloy said.”