Our thoughts are with the long suffering residents of Kaikoura after the township was rocked by yet another strong earthquake.

Geonet reported on its website that the quake was centred at a depth of 17km and located 15km north-east of Kaikoura. Its intensity was described as “strong”. The quake struck at 2.10pm.

The north-east of the South Island is still recovering from last November’s 7.8 magnitude thumper, a complex series of quakes that struck across several faultlines. 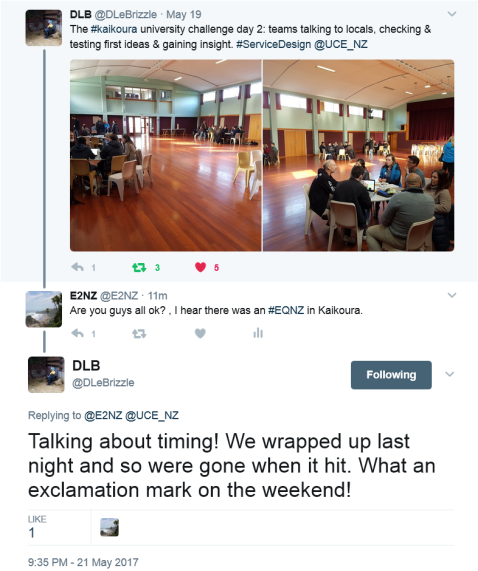 Fortunately there have been no reports of injuries or substantial additional damage. As yet, there’s been no word about what effect, if any, the quake had on clearing the many slips that block some of the roads to Kaikoura.

As of 22 May 2017 at 10 am, Geonet’s current aftershock forecast is that there is an 11% chance of one or more M6.0-6.9 earthquakes occurring within the next month, down from a 13% chance in their April forecast. However, Geonet is still advising people to be prepared for earthquakes for some years to come:

But does this mean we are all in the clear and don’t need to worry about more big earthquakes? No, absolutely not.

Another big earthquake is still well within the probabilities in our models. A 11% chance in a month is still a concerning probability. We need to continue to be prepared for earthquakes as these will go on for years to come.

The ongoing Canterbury Earthquake Sequence is an example of aftershocks that can last for years after the initial mainshock (which was the M7.1 Darfield quake in 2010). source