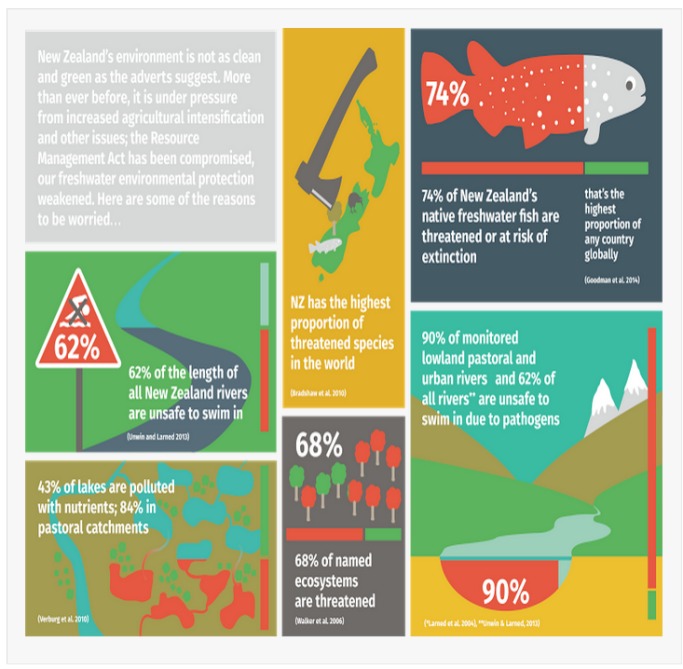 Today we’d like to bring to your attention an excellent blog called Writehanded and its commentary on New Zealand’s environmental record. It is another site that is busting some of New Zealand’s self generated myths and raising awareness within New Zealand of some of the propaganda that’s promulgated about the country..

The Writehanded author talks about the NZ government moving the goal posts to meet its own environmental targets, rather than deal with the problems that cause the pollution. The result is a massive degradation of New Zealand’s environment and the promotion of greenwashing strategies, such as the 100% pure brand, to cover it up.

This relocation of environmental goal posts to suit political agenda is something we’ve written about before. Writehanded may have recently become aware of New Zealand’s environmental degradation, but our readers have known about it for some years.

For example, a few years ago air pollution standards were dropped (despite over a 1,000 fatalities in urban areas every year from air pollution) because of the the implications for industry, i.e.resource consents were refused in catchments that could not meet the required air standards so the air standards were altered, rather than pollution reduced. Sustainability in New Zealand is a distant, unbelievable goal if the triple bottom line is so blatantly and easily rejected.

Here is an excerpt from Writehanded’s. “NZ:100% Pure Bullshit”

I wanted to share a couple of things from Dr Mike Joy’s RADtalk for LitCrawl. After he spoke, the room felt like it was in shock. Basically, New Zealand’s environment is way, way more fucked than we think it is. Like, totally fucked bro.

There’s no way I can do this justice the way that Mike did, so if you want more information look at the Freshwater For Life site and get his e-book, Squandered: The Degradation of New Zealand’s Freshwaters.

In ten minutes, Mike completely undid everything I thought I knew about New Zealand’s environment. I mean, I knew that 100% pure is bullshit, but I didn’t know just how much bullshit. 100% bullshit. Shit being half the problem.

On paper, it looks like the government and the Department of Conservation is meeting their environmental targets and making progress. In reality, all they’ve done is shift the goalposts. What was considered unacceptable toxicity in rivers before, they just reclassified to make it acceptable. And they’ve done it over and over in so many different areas. It is literally horrifying.

Here’s some of the things Mike shared…

[images, one at the top of this page, one below]

The highest proportion of threatened species in the world. What the fuck??… read on

You may remember Dr. Mike Joy. Prime Minister Key tried to discredit Dr Joy in his BBC HardTalk roasting by Steven Sackur and in the process failed miserably to defend New Zealand’s 100% pure brand. Backtracking a few years later, Key eventually conceded: “100% Pure is like McDonald’s ad…it’s got to be taken with a bit of a pinch of salt“

Here’s what Dr Joy, senior lecturer in Ecology at Massey University, has to say

Note: Since the Key National Government came to power, the word ‘sustainable’ has been deleted from governmental and departmental vocabulary.

New Zealand is currently running at 162nd in our environmental performance out of 180 countries globally.

It is extremely difficult to access data on water quality in this country as it is ‘locked away’ from public scrutiny, even the Ministry for the Environment does not write it up for public consumption.

Researchers have to spend hours and days searching out any little snippet of information that is buried in Regional Council reports, because these reports too, are filed away from community analysis.

The reason for this impediment is because there is no Agency in this country that deals with such basic and important factual statistics and information and if this accumulated data was in the public domain, the Ministers involved would look so bad that the charade of ‘Clean Green NZ’ would be coherently shredded.

Yet, the latest statistics that are available for public information still go back to a 2004 report. Even though the 300 areas that are tested and sampled ‘to this day’ remain hidden from public view, and can not be accessed by scientists like Dr Mike Joy.

This vital information is being ‘censored by omission’ and the Ministry for the Environment and the 16 District Councils, only issue ‘feel good’ information on the better sites, (the upper high country where there is no population or industry) never the true story in the low land areas of farming, industry and population density. In essence, making a silk purse from a sows ear!

And it has been only in the last 20 years with the intensification of dairy herds that our water has really lost its purity. This due to the addition of far too many cows, as the population continues to increase.

11 humans are equal to one cow in their capacity to ingest and excrete. A conservative estimate is equal to 66 million people inhabiting NZ, the same population as the UK.

With the intensity of increasing cow numbers huge amounts of urine ends up in paddocks and in the process is changing the soil chemistry and seeping down into the water and into the greater catchment area, and this is not being factored into the pollution equation.

Adding to this, commercially manufactured urea is being spread on the land from urea plants as well as the use of more phosphorous to speed up plant growth, however a by-product of super phosphate is cadmium. NZ is now dangerously close to toxifying its soils, plant life and live stock with excess cadmium that ends up stored in the kidneys and liver of live stock, that if the animals are over 18 months of age – it is illegal to sell kidneys and liver for eating. (This is news to me!)

NOTE: New Zealand children are already exceeding the European levels of cadmium from our food chain

Scientists here in NZ like their counterparts worldwide are reluctant or prohibited from speaking out on environment or health concerns, for fear of losing their funding, or losing their job. They are under the hammer to keep their mouth firmly shut! Such is the power of the commercial imperative!

Treasury, which is the tail that wags the dog in this country is bloated with economists and Mike posits the idea that if we could have another department alongside it full of ecologists, we would strike a dynamic balance.

Mike says that what is happening in nature is that the fauna are now acting as the canary in the coal mine.

The tiny white bait (inanga) in our streams are being seen as the indicators of the health of our water ways and they are all being threatened, 4 out of 5 are now on the endangered list, same for fresh water crayfish and our eels, and the eel story Mike tells is near on bizzare in the extreme.

KPMG, one of the largest professional services companies on our planet, states in a new report that New Zealand has 5 years to clean up our clean green image, or we will lose it!