Video has emerged of the dramatic scenes of a bridge collapse on the Great Walk Lake Waikaremoana in New Zealand, in which 4 French tourists plunged into the river below. The uploader said the bridge was rated for 10 people yet the cable snapped with only four people on the bridge.

Scene from the video taken immediately after the bridge collapsed. Note what appears to be rust on the right hand side of the frame.

Its interesting to compare official accounts of the Lake Waikaremoana bridge collapse in which a “cable released” causing the walkers to “slip off” and fall 8 metres, with what actually happened. Watch the video above, uploaded to YouTube by Adrien Whistle. This is what one of the party said about the incident translated with the aid of Google Translate:

After meeting Roland Adrien and every four we decide to make a four-day walk around Lake Waikaremoana.
The hike goes well, now we come to the end of 46km. We have one last suspension bridge to cross. The panel shows a maximum of 10 people.
Arrived halfway we hear a thud and before you have time to anything that’s thrown me into the empty fatally accepting what follows. One of the two cables has laché. After the impact with the water absorbed slowly I start up, I see that I have nothing broken and look around to search everyone. I see standing Enzo, that’s a relief. Adrien then I see a little further, as we all astounded. No Roland. I look up, it is still on the bridge, I do not know by what miracle, I see it climb slowly to the other side of the earth. The boys and I decided to quickly cross the river to the risk that the other cable loose and that the remains of the bridge joining us below. We have water up to the top of the knees. In shock I return to my senses and climb the hill to finally arrive at Roland.

After this accident follows a series of meetings. The DOC (Department Of Conversation) took our statements. Two members of the Tuhoe tribe council explain the complex history of this land. They also tell us that we fell to 8.5m high.

The Tuhoe Maori have as many experienced colonization and wars. But also the confiscation of their land. The government has later admitted liability and made part of the land to the tribe. In recent years an amendment was voted for land management lies with Tuhoe to respect their culture and traditions. The latter entered into force only a year ago. Since then the DOC institution working under the supervision of the Board of Tuhoe. The national park has no owner, it belongs to himself, which is unique.

For the full story here is the link to the website of Tuhoe: http://www.ngaituhoe.iwi.nz/our-history

Several questions arise. Faced with this “sharing” of responsibilities, Tuhoe want to accompany us in every step: we start in the big neighboring city in Napier where we spend a few days time everyone consults a doctor, rests, etc. I want to remind that no one was injured.
Unlike the DOC which to date has been of no help. In our testimony we ask several questions about the equipment maintenance procedure, no response is given, we will learn later through newspapers answers to our questions.

This information had to be shared fairly. Not only informative and preventive but also to expose the entity that is the DOC (belonging to the Ministry of Environment). I will keep you informed following the next items that will be given to us. Indeed several investigations are conducted simultaneously by different entities to determine the cause of the accident.

I would strongly advise any walker anywhere in the world never to underestimate the risk for obstacle clearance. Remember to pass one by one on all types of equipment and not to play on structures that may be far more fragile than what they owe.

Here is a photo of the bridge in question after the accident and three links of articles (both the New Zealand Herald on two different dates and the press release made by the Tuhoe tribe).

Read a very interesting discussion about the accident here at New Zealand Tramper about the way in which the information stream was controlled by DOC; and “formalised media releases” rather than investigative journalism.
We originally wrote about the collapse on 7 Sept:  “New Zealand’s Reputation “Vulnerable” after Lake Waikaremoana Bridge Collapses, 4 French Tourists Injured” and its similarities with the fatal Cave Creek Disaster, when a scenic viewing platform in the Paparoa National Park failed, resulting in the deaths of 14 people.

This is what we said:

“As a result that has upset the stability of the bridge and that’s where people that were on the bridge have slipped off and fallen.”…

Mr Slater said a full investigation was now underway to work out what had occurred. “We’ve got a very comprehensive and robust asset management system.” source

Robust and comprehensive. So why did the cable “release” and what does this mean for other bridges and platforms in the National Parks? Was the bridge, or any of DOC’s structures inspected after Cyclone Pam in March 2015?

Mr Slater said there could be implications for other structures in national parks, but DoC would not be checking the safety of all 524 cable bridges throughout the country until this priority investigation was completed.

Meanwhile, John Key’s government has been urged to check the bridges on all Great Walks tracks. Conservation spokesperson Ruth Dyson said DOC needed an immediate funding boost to carry out the checks:

“For them to undertake safety checks now they will need extra resources, they cannot do it out of their existing budget. We cannot afford to have anyone else injured or killed in what is a Department of Conservation facility.”

The Te Urewera board that manages the area with the Department of Conservation said the bridge was last checked in June. Ms Dyson said something had clearly been missed during the check…source

As with any incident involving overseas tourists, the people in charge are very conscious of their overseas reputation. New Zealand has something of a track record for killing and injuring tourists. Ruth Dyson said

“It is a huge relief the four overseas tourists on the Lake Waikaremoana bridge that failed yesterday landed in water and were uninjured. This is good luck not good management. Our reputation cannot rely on luck. source

Indeed it can not. That’s what very comprehensive and robust asset management systems are designed for. Why then was there a need to mention seven years of budget cuts and the intolerable strain this has placed on DOC?…

“The cable failure is not only extremely concerning, it leaves New Zealand vulnerable to harmful tourism reaction. This must be sorted immediately.

“Additional resources must be given to the Department to carry out this work as it is obvious the pressures on them following seven years of budget cuts, are causing greater strain than they can tolerate.” source

Our advice to tourists in New Zealand remains unchanged. Do not expect safety standards to be as high, or as rigorously maintained as they are in your own country. Indeed, the father of one deceased British tourist, actually wrote to John Key saying New Zealand’s safety regulations were “third world” after his daughter drowned:

“People are going to New Zealand and expecting that it will be regulated like a western country but that really isn’t the case.” Chris Jordan

Planning a vacation in New Zealand? You may also like to read:

Etienne Lemieux and Louis-Vincent Lessard. Two bodies found. DOC does NOT manage avalanches on the Kepler Track (July 2015) – …From late April to late October, facilities on the Kepler Track are greatly reduced, and there are additional safety hazards to consider. Furthermore, DOC says it does not manage hazards such as flooding or avalanches but still collects fees for hut use, believed to be about $50NZ per adult…

Rescued campers ‘rather foolish’, say police (Sept 2015) – Despite not knowing what equipment the hikers had, their level of experience, or their understanding of English, the two Latvian tourists were branded ‘foolish; for setting off after adverse weather conditions had been forecast in the Nelson Lakes National Park.

To us this looks like yet another adventure tourism fail. Fortunately on this occasion no-one was killed or seriously injured, it is however a reminder that you take your life in your hands when vacationing in New Zealand. 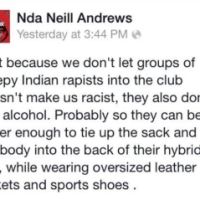