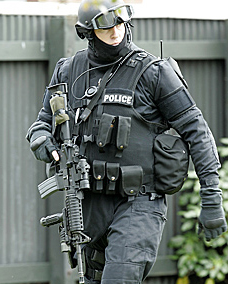 Apparently, the whole thing kicked-off with a shotgun hold-up at the Jokers Bar in Point Chevalier in Auckland. An alert member of the public saw a group of suspicious people entering the bar wearing hoodies, he took the registration number of the car they were using and police were waiting for them when they got home to Flatbush, 20kms away. Why police chose to mount a blockade against armed bandits on suburban streets close to a school, rather than at the location of the robbery, is unclear but we’re very relieved to hear that no-one was injured in the operation.

“Three women and two men allegedly held up an Auckland suburban bar with a shotgun before driving 20km across the city yesterday, where they were blocked in by armed police. A witness saw a suspicious white car pull up on Carrington Rd in the western suburb of Pt Chevalier about 10am. Its occupants donned hooded sweatshirts before storming into Jokers Bar.

Police would not say how much cash was taken in the robbery.

The person noted the car’s registration and phoned police, helping them track the alleged robbers to Carseta Pl, in the Manukau City suburb of Clover Park, a couple of hours later. From about midday dozens of locals, including mothers with toddlers in strollers, gathered at a police cordon at the intersection of Othello Dr and Israel Ave in Clover Park, prevented from going home.

Sydney Koha was visiting his brother Shane Koha, the father of six young children. “We are just concerned about the kids coming out of the school [Clover Park Middle School],” he told the Weekend Herald. “Thank God it’s over,” Mr Koha said when police lifted the cordon about 3pm.

Acting Senior Sergeant Mark Rowbottom said bringing in the alleged robbers was a “textbook execution” by police. Nobody had been hurt and five people – three women and two men – were in custody, he said.

Two streets away at Carseta Pl, armed police guarded the two houses of interest – one a well-kept yellow bungalow with flowerpots in front and white crocheted curtains, the other a two-storey wooden house on a sloping, grassy property with a stand-alone garage. Neighbours said the families who lived there seemed friendly and had a number of small children.

Another family deciding that armed robbery is a great career choice in NZ? at least this group didn’t use a people carrier. It must be one of the fastest growing occupations in NZ right now.

“We don’t talk to them or anything but they used to bring us fruit,” said Lisi Pio.

But another resident said one suspect had only recently finished a home detention sentence. Another neighbour said he had known a previous occupant who was “inside” now.

A Jokers staff member told the Weekend Herald nobody was hurt “and yes, we’re back in business”. Those who were working during the robbery had been sent home, she said.” source

Reports issued yesterday suggested the arrested felons may also be responsible for other armed blags in Auckland in recent months, of which there’s been a great many. Hopefully, these arrests may bring about a brief lull- all shopkeepers, innkeepers and bank managers can breathe easier, for a while.

Unfortunately armed robbery has become a widespread problem in New Zealand, hardly a day goes by without one happening somewhere. It’s a symptom of a deeply divided society with an ever widening  gulf between the haves and the have-nots. Even the kids are going into shops armed to the teeth with guns, hammers and knives  to steal ice creams and sweets. (see New Zealand, a Great Place to Raise Kids)

Three days later the boys in black were busy again when the Armed Offenders squad cordoned off roads and surrounded a house in Pakuranga Road, South Auckland. Witnesses say the police were negotiating with a person holed-up in a property. The incident is thought to have ended without injury or loss of life. See “Another dickhead on the lose in Panmure”

We keep a list of all the armed hold-ups we get to hear about, you can find it here