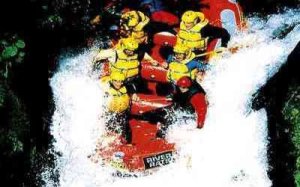 The public are today getting the chance to comment on council proposals to clean up the Maketu Estuary in the Bay of Plenty and the Kaituna River, which could cost an estimated $1 million.

The waterways, which include the highest commercially operated white water rapids in the world are contaminated by nitrogen, discharges from waste water treatment and freezing plants, and run off from farms and septic tanks.

According to the NZ Herald the Maketu Estuary

* (Is a) popular eeling and whitebaiting spot. Fishing for kahawai and snapper is also common in the area.
* Currently receives 4 per cent (100,000 cubic metres) of the Kaituna River flow per tidal cycle via the man-made Fords Cut.
* Has had a decline in plant and aquatic species.
* Is heavily polluted by a freezing works, wastewater plant and farm run-off going into the Kaituna River.
* Development around the river, reduced buffers between the land and the water, stock grazing and silt have also contributed to pollution, reduced wetlands and fish spawning.
* A working group is proposing more water be diverted from the river to improve water quality.