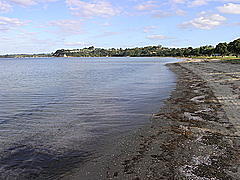 Continuing in our series of Migrant Stories: first hand accounts of migrant life in New Zealand, taken from locations around the net.

This tale is taken from an expat forum. The poster, a British tradesman who lives in Northland,  has been in New Zealand for more than three years, has tried both South and North Islands but has found, as have many others, that the ‘scenery is not enough‘.

He’s had problems breaking through local price-fixing  cartels, is disillusioned with the quality of housing and dangerous drivers. He’s twigged to the 100%  Pure myth and to the violence and brutality present in some sectors of society. He’s thinking of giving it another two years but he has a Kiwi wife so the pressure must be on him to stay put: caught between a rock and a hard place. Should he stay or should he go?

“Me and kiwi wife moved to Nelson Jan 2007, after 18 months realised it wasn’t for us. Like a lot of NZ it is cliquey, and remote, not to say expensive.

We now live at Snells Beach about an hour north of Auckland. Beautiful spot great neighbours and for us probably as good as it gets. So why am I bored and frustrated with life here?

Trying to start a business is much more difficult than the UK, trying to open biz accounts with companies is like pulling teeth.

If people are putting a few bucks in your pocket they seem to think that you are their bonded slave !

The food and construction industries are each run by 2 cartels who fix prices across the board I’ve encountered 900 % mark ups on building materials personally !

Roads are frequented by morons who can’t drive but think they can.

The media seem to be in the pockets of big buisness therefore none of the above is ever broached by the likes of ‘Fair Go’ instead they go for the small fry.

House construction – what a joke, they sell glorified garden sheds for 6 figure sums and they cany even keep the rain out !

Leaky homes – came about because of the greed of big biz and the ineptitude of government – of course everyone is denying responsibility in true kiwi fashion.

Sport – very popular, because there’s bugger all else to do !!

Insurance companies – excellent at taking your money and finding ways of not paying out on claims.

Clean Green NZ – total bulls**t, if there’s a buck to be made then it WILL be made just see what happens with the mining.

Fishing – stocks are rapidly decreasing so get out there while you can !

Pig hunting – it’s what the hillbillies do when they’ve run out of relatives to beat up or rape.

Domestic violence – NZ is up there with the best of em.

I know I sound negative but I’ve found NZ to be like a dumb blonde, great to look at but very little else.

I’m giving it 2 more years, if it doesn’t improve for us then its back to the traffic jams, bombers and civilisation!”

The poster ends by saying

“This country is very conservative, to many greedy people and far to many people accepting the status quo. Unfortunately things arn’t going to change any time soon, being a remote Island, we’re at the mercy of the power brokers. Does anyone remember the ‘RIP OFF BRITAIN’ revelations ? If only they knew !!!!”

A few days later he added this:

“Another thing occured to me recently. I bought a picture book, about 50 images of great places in NZ, milford sound, rotorua etc etc. The only places in the book that I’ve actually been to happened during the 2 holidays we had here before emigrating. Whats the point in living in ‘Gods country’ when you’re priced out of seeing the good stuff ?
And what’s with the architecture here ? Are all kiwi architects on mind bending drugs or what !”

His post is similar to another Tale – “Married to a Kiwi in God’s waiting room” its about another family for whom the scenery was not enough and they left after two years.

One thought on ““3+ Years In And Missing Blighty””