Gurveer Singh’s story was first published in the Bay of Plenty Times. His tale is a fairly common one among migrants in New Zealand – they fall for the immigration websites’ hard sell, pay their money, move to New Zealand believing their skills are needed. When they arrive they can’t find work because of “cultural prejudice” (a euphemism for racism) and a “lack of New Zealand experience” (i.e. employers only want to employ Kiwis, not migrants).

Here’s some of his story, click on the link at the end if you want to read the full article: The Big Read: Revealing the Bay’s racism underbelly

Gurveer Singh fights back tears as he talks about discrimination in Tauranga. “Racism is here,” he says quietly.

Singh came to New Zealand seven months ago in search of a better life, choosing Tauranga because immigration websites had said it was booming and a good place to get a job.

“It’s not reality,” he tells the Bay of Plenty Times Weekend. Singh is 24 and has a degree in IT from his home country of India. “We IT guys are not getting any jobs.” he says.”They are asking for New Zealand experience, but if we are not getting the jobs, how will we get experience?”

Singh is from the northern Indian state of Rajasthan, where he says corruption is endemic and despite his education, work is scarce. He is doing a Level 7 diploma in computing at NTEC in Tauranga to add to his degree and passed his latest exam this week. But despite applying for a host of positions, Singh says the only work he has been able to secure is part-time at an orchard.

“I don’t want to work in an orchard because I am a professional and have my bachelor’s degree, but still I have to earn my livelihood,” he says. Singh believes cultural prejudice is the reason he has been unable to find a job of his choosing. He says he is overlooked by potential employers because he is Sikh and wears a turban and beard…

…Asked if he thought he would face discrimination before arriving in New Zealand, Singh replies: “No, not at all. I did my own research and according to my research, New Zealand people are very friendly.” 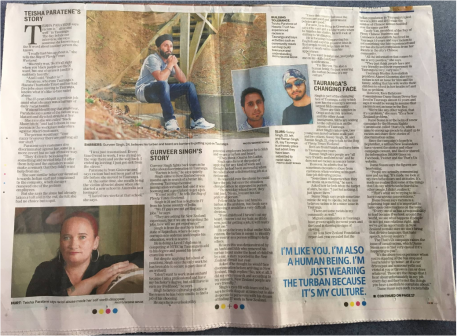 Thanks to #Bay of Plenty times’ #Reporter & #photographr who helped me to rise my voice against Racism.

Sikh Brothers’, we are here to get success & I believe that Kiwi’s are awesome people, they give respect to every religion, they also helped me a lot but some people are not having proper knowledge about #Sikhism so sometime they see Sikh people in different way.

As I had an interview with Bay of plenty times & I tried to explain them about my religion & my situation and they are Kiwi’s who helped me to raise my voice.I think after reading this article everyone will get awareness about my Religion & they will help me to get success in this country.

Friends, I want you to #share my view with others so that this article will reach to everyone & people will get aware about #Sikhism. Please #like and #Share

We wish Mr Singh all the best for his job search endeavors and in raising awareness of the Sikh religion. We invite him to join in the community here at E2NZ.org.