In this year of the horse we wanted to tell you about the shocking maltreatment of a rescue horse, stolen from a her owner’s property in the Napier suburb of Maraenui, Hawkes Bay.

Stella, a 15-year-old mare with a diseased hoof, was stolen and ridden through the streets of Napier – causing serious damage, with ongoing consequences.

The horse belonged to Ashleigh Kearns, 15, whose father discovered the beloved pet at a Napier property days after its disappearance – she was dehydrated, with an ulcerated mouth, tight muscles, tendon swelling in her legs and hoof damage.

“He just happened to see her ears as he was driving along, he knocked on the door and said ‘You’ve got my horse’, a woman slammed the door in his face and ran down the road to get back-up,” Ashleigh’s mother Sharon Steed said.

“They returned with a golf club, which they swung at him but missed twice, they were swearing at him for taking back his own horse.”

During the two days Stella had abducted she’d been abused, beaten, badly injured and lost most of her hooves. The people who are alleged to have taken were photographed and the pictures uploaded to Facebook. 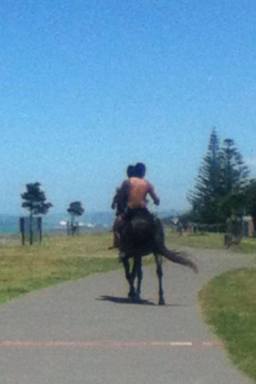 Stacey McCann Uggh, I can’t believe how absolutely heartless some people can be, I saw her on Saturday afternoon when I was driving along Geddis street and turning left into Bright cresent, a maori boy was in the front with no top on (just like in the photo) and a biggish girl was behind him. I had no idea it was a stolen horse. They smiled and waved at me.. if only I had known

If you would like to donate to help Stella’s recovery costs you can either donate through Give A Little (see link below) or directly to this account:  38 9007 0521547 00  ‘Steed’ is the bank account name.

This page has been set up to tell the story of Stella, our loved horse who has been stolen and abused by a group of local people.

Stella came to our family as an abused rescued pony who was in need of love and care. Over the past four years Stella has given us her trust and love as well as become a treasured member of our family.

On Friday the 13th thieves took our locked gate off its hinges in Riverbend Road and took our beautiful girl. For two days they abused her. They raced her on roads through Maraenui, they used a piece of rope through her mouth as a bridle and they beat her.

Stella was already nursing injuries from her past abuse and they loaded her up with large men and road her until her hooves came off. They hid her in backyards in Maraenui and gave her no food or water.

We thought we had lost her. They posted status’s and photos of themselves on Stella and joked about racing her around their neighbourhood and about swapping her for a car!

Stella was spotted Sunday morning and when we tried to get her back from the thieves, we were attacked with golf clubs.

Stella has a long road to recovery and this page is dedicated to her story. We will share with you photos of Stella and also videos of the damage these low-life’s did to our beautiful girl.

All we ask is that you ‘share’ this page with everyone. We need these people to be charged for what they have done. We know who it was but the Police are yet to press charges. Help us make a stand for horses and animals everywhere that don’t have a voice…….if Stella had been a flash car I’m sure charges would already have been laid.

Help us to help Stella.

Warning:
NAPIER Horse thieves are still on the prowl. Paddock down Riverbend Road was again targeted. This time fences were cut but thankfully they must have been disturbed and couldn’t get to horses.  Waverley Road, Meeanee and Pandora area have also been targeted.
Please keep an eye out for anything suspicious and phone police straight away.